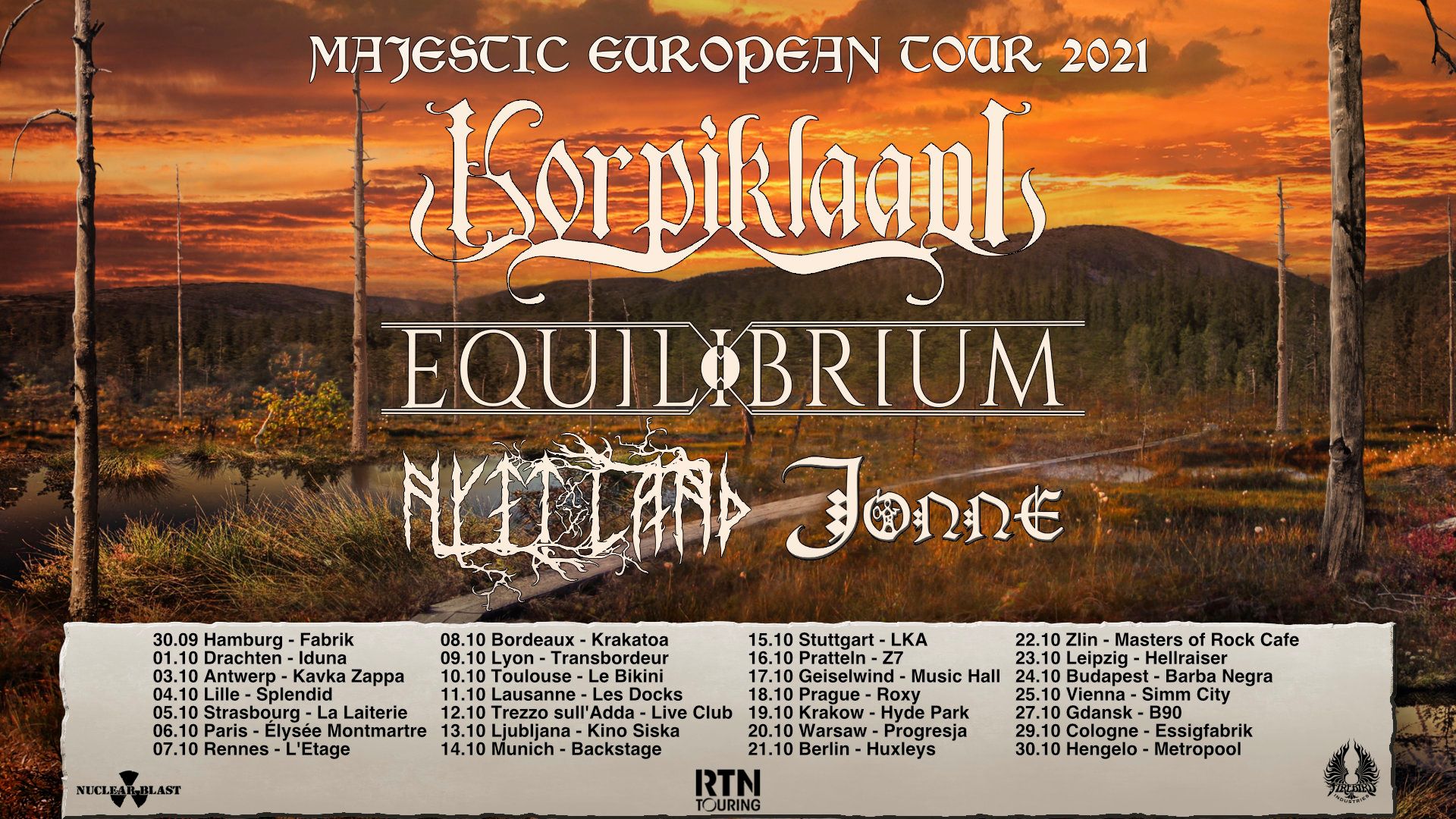 Finnish Folk Metal Superstars KORPIKLAANI & German Pagan Metal Legends EQUILIBRIUM are proud to announce that they will join forces for a European co-headline tour this Fall under the name „Majestic European Tour 2021“. They will be supported by nordic folk / ambient band NYTT LAND from Russia and KORPIKLAANI front man Jonne Järvelä’s own solo project JONNE, which features Samuli Mikkonen (KORPIKLAANI) on drums, Jesper Anastasiadis (TURISAS) on bass and Dimitri Keiski on guitar.
This line-up of diverse approaches to folk & pagan metal, ranging from acoustic and ambient to sweeping, epic & extravagant, leaves nothing to be desired. It promises just the right kind kind of memorable, excessive nights we all deserve after this overly long period of drought
KORPIKLAANI are looking forward to playing new songs from their critically acclaimed latest album, Jylhä, live to an international audience for the first time. Jylhä was released on February 5th, 2021, through Nuclear Blast, and was rightfully hailed as the band’s most mature & ambitious work to date.
KORPIKLAANI front man Jonne comments:
„It is about the god’s time to get a chance and get back on the road again. That’s why I don’t mind to play two gigs every day. We are going to start the evenings with my solo band ‚Jonne‘. It will be an acoustic set up, and then we will close each evening with Korpiklaani. It’s gonna be great! See you all there and let’s have some serious fun!
Peace, Love, Folk and Metal!“
EQUILIBRIUM, one of the most popular pagan metal bands in the world, are extremely pleased to be able to tour again and to showcase a career-spanning live-set that will certainly include material from their latest album, Renegades (2019), as well as older fan favorites. Coinciding with the tour, EQUILIBRIUM are planning to re-release their second studio album, Sagas (2008), this Fall to celebrate their 20th anniversary as a band.
EQUILIBRIUM guitarist René Berthiaume comments:
„This year EQUILIBRIUM celebrates 20 years of band history. And even though we have very unsure times in the live music industry at the moment I think it is important to keep on going and planning and give some hope and perspective. We are very excited about this tour, because we are gonna put on a special live set with songs from all of our albums. On top we are releasing a new and an old unreleased song from the „Sagas“ sessions during this Summer as well. So you can expect the whole b